Mature Hairline vs Receding Hairline and Balding – facts and details 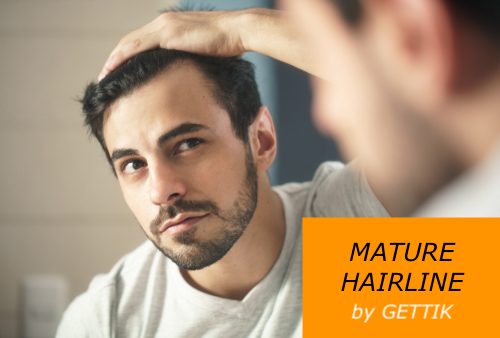 Hairline in human males differs at different stages of life. Observing the hair go back and watching the forehead becoming wider is not always necessarily the outcome of a possible future baldness. It can also be a sign of maturation of the hairline.

Hairline in men seldom remains where it was when they were younger. As men age they notice their hairlines receding which might instigate an alarm. However, these can easily just be mature hairlines and not an indication of balding as it is very easy to confuse the two.

Men would usually observe their hairlines at different levels at the age of 17 than when they age to 27 or 37. These differences in the hairlines can confuse them or even make them fret over a possibility of baldness in the future as the hairline begins to recede after they hit puberty

Maturing hairline will appear to be receding for a while before it stops. It might be straight or there could be irregularities like those with men having widow’s peak. Widow’s peak is a central growth in the hairline in the middle of the forehead which gives an impression of balding temples.

Mature hairlines might resemble the receding ones but there are some very distinct features to both of them that set them apart.

Natural Shift In The Hairline

Normally, the hairline is even across the forehead and rounded at the corners. This hairline is called “Juvenile” hairline as it changes when the person grows up, particularly men. No matter how intently you take care or have the best sets of genes, this hairline is destined to change and recede to some degree in over 90% of the men.

As men age, their hairlines start to change. Between 18-28 years, the juvenile hairline starts to recede and rearrange into the mature hairline. This change is natural and not a sign of balding. The hairline goes through final maturation during these years.

Ageing is a process that occurs in almost every part of the human body. After puberty, the body goes through a number of quite noticeable changes. These changes are largely due to a surge in certain hormones and a particular balance being developed among them. (William R. Rassman, 2013)

Like everything else, hairlines are also dependent on the intricate balance of these hormones. One such hormone is androgen. It’s a steroid hormone and has a higher percentage in men post puberty. Dihydrotestosterone (DHT), in particular, plays a huge role in miniaturization of the hair follicles after their release in the body at puberty. This hormone is responsible for the development of secondary sexual characteristics, like deeper voice, facial and body hair growth, ironically, its abundance leads to baldness.

Normal amounts of DHT is essential and produces normal mature hairlines in adults, but extra production often leads to baldness, particularly, male patterned baldness. This happens, because DHT is more potent than testosterone alone and attaches to the receptor sites for a longer period of time, causing an inflammatory response in the hair follicles.

Higher than normal levels of DHT slowly miniaturize the hair follicles with time and causes the loss of hair permanently. The receding hairline typically shows a horseshoe shaped pattern in men and a bald patch on crown for women. (Martinick, 1999)

This shape is also linked to the abnormally increased secretion and accumulation of DHT at the areas more prone to the hair loss, making a horseshoe pattern. This is linked with chronic scalp tension in people who develop this shape of hairline.

Chronic scalp tension is transmitted to and detected in galea appunurotica. From here a signal goes to the androgenic tissues which are prone to alopecia. These tissues then get inflamed and the hair loss begins. DHT is not directly responsible for the miniaturization of the hair follicles but risk factors like chronic scalp tension add to the inflammation and loss of hair follicles.

Increased amount of DHT however, does contribute to the thinning of hair and weaker hair follicles. This leads to an eventual hair loss by the process mentioned above.

Anabolic steroid drugs may also cause hair loss and baldness down the lane. These drugs are known to cause an increase in the levels of androgens in the body and therefore increased hair loss.

Maturing of the hairline is a natural phenomenon that happens to 96 % of the men as they hit puberty. It happens because of a normal shift in the concentrations of hormones in the body and is coupled with the development of secondary sex characteristics.

The hairline does go back a little when matured as compared to the juvenile hairline, but that does not necessarily signify that the individual is going to get bald in the near future.

For most men, maturation of hairline is so subtle that they don’t even notice as it happens. However if there is a possible baldness, it is easily noticeable as the loss of hair exceeds the new hair growth and there are evident bald spots. (Kavish Chouhan, 2019)

Hamilton-Norwood scale is one way to determine whether the pattern of hair loss lingers towards baldness or simple maturation. For the stages 1 and 2, the hairlines are most likely to be mere mature and not balding at all.

How To Detect Maturing Of The Hairline

For normal maturation of the hairline, it happens for a long period of time, years. So it might go undetected or the difference might hit at once if you observe it.

This maturation might also feel like the hair in front of your forehead are receding as the hairline would be further away as compared to the juvenile hairline. This could be a cause of concern.

However, there is a very simple way to measure the whether the hairline is maturing or receding.

Hairline is an entirely different part of head than the bulk of hair. The two can’t compare as both have different qualities of hair to begin with. (Ogunmakin KO, 2011)

Hairline signifies as a mere silhouette of the hair that demarcates the border between hairless skin and the scalp. The bulk of hair on the scalp is always thicker and has more body and thickness than those at the hairline. Comparing the two is not right for that reason.

Maturation of hairline can scare an individual if their hairline recedes at a higher pace with greater than normal hair loss. This can be managed with the use of Finasteride under prescription or minoxidil

Revivogen is a not a drug, and is advised to the people with receding hairlines as well.

There are other alternatives that can be used to reduce the hair loss and stop the recession of the hairlines after they mature. These alternatives are natural and don’t require the use of any chemicals.

As the hairline turns from juvenile to mature, there could be a need for changing the hairstyle. This change in hairstyle can be a daunting task as it could be drastically different from the one that you were used to.

Following are some manageable hairstyles:

In conclusion, the hairline you see changing as you age could be merely because of your body changing. It could be a natural change and absolutely normal, the mature hairline.

However, if the signs of these changes are quickly noticeable, it could be a receding hairline which is an issue of its own. There are ways to know which one is it and ways to slow down the process, all it takes is timely detection of the source of recession and finding its remedy.

Maturing of the hairline is not something to be scared of and though, there are conflicting ideas on whether it produces baldness or not, you can always find a solution of it online! Personal Style Tips | How To Change Your Style | GETTIK

How To Change Your Personal StyleEveryone has their own personal style. Essentially, the way we choose to dress, do... Trichologist or Dermatologist ? Who Can Help You Better With Hair Problems?

What is Trichology?Trichology is defined as the study of the hair, scalp and problems related to them. It incorporates... Receding Hairline – Should I be afraid? 30 second solution

Men around the world, regardless of age, fear of losing their hair or going bald unites the masses. In this blog, I...

This site uses Akismet to reduce spam. Learn how your comment data is processed.